You are here: Home / Space / How will the first Chinese rover attempt to land on Mars? 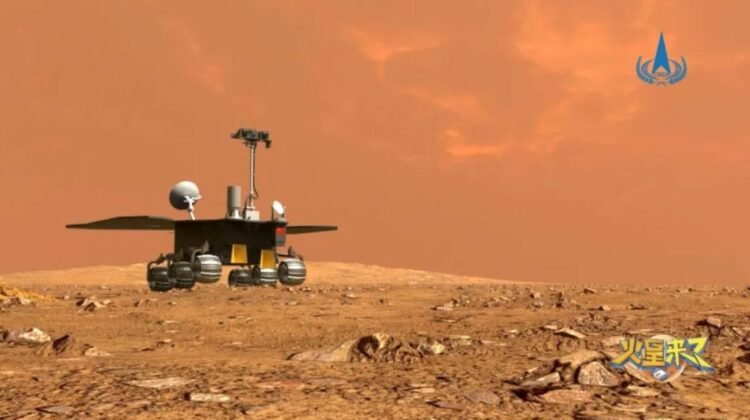 The year 2021 has gotten off to a busy start on Mars with the arrival of missions from the UAE, China, and the United States. NASA landed the Perseverance rover on the planet’s surface in February. Now, China will be next to lower its first vehicle to Martian soil, which is expected to be done with some differences from the U.S. missions. If all goes well with the landing of the Zhurong rover, the country will become the second to successfully land a rover on the Red Planet.

The Tianwen-1 (“search for the celestial truth”) mission consists of an orbital probe and a lander containing a stationary landing platform where the Zhurong rover is located. Since its arrival on the planet, the spacecraft has been orbiting Mars and studying its landing site, which will apparently be in the Utopia Planitia region during the middle of May.

That said, China has a big challenge ahead of it, as landing on Mars is not easy, and it is no wonder that the historical success rate of landings there is only 50%. For the procedure to be successful, the spacecraft needs to enter the Martian atmosphere at a very high speed, only to be slowed down and land on the surface of the planet during the most critical stage of the mission. The whole process is quite delicate because while orbiting the planet, the spacecraft move quickly to stay gravitationally “attached” to them.

The problem is that if they enter the atmosphere with all this speed, they will end up burning up even in a thin atmosphere like that of Mars. For example, the orbiters monitoring the Red Planet today are gradually slowed down until they reach the desired orbit, a method that also works to “correct” the orbit of a spacecraft before the lander’s atmospheric entry. This maneuver takes no more than a few months and also requires no extra equipment.

Since it uses the planet’s atmosphere for the spacecraft to lose speed, it is called an “airfoil” maneuver. However, the maneuver alone is not enough to help a rover descend safely: since the planet’s atmosphere is only 1% of the Earth’s atmospheric density, some extra resources must be used – this is why the Mars Pathfinder mission, for example, used parachutes and an airbag system to land safely, and a similar strategy was used by the Spirit and Opportunity rovers.

The Curiosity rover, on the other hand, relied on a new system, with rockets and wires that sustained it until it descended to the surface; then a similar technique (but with some new features) was used more recently with the Perseverance rover. There are still no details about the landing of the Zhurong rover, but some information from Chinese researchers gives us a glimpse of the sequence: we can expect the vehicle to enter the Martian atmosphere protected by a heat shield, traveling at a speed of 4 km/sec. When it is decelerated, the rover’s parachutes will be released to assist it in its descent.

The last stage of the landing sequence is expected to be supported by rockets to aid in deceleration. However, the Tianwen-1 mission will have two differences from the U.S. missions: the first is a laser rangefinder to identify the position relative to the Martian terrain, and the other is a microwave sensor that will be used to determine the speed more accurately. Both instruments will be used for any navigational corrections as the descent takes place.

Then, when it reaches the end of the descent phase, optical images and a lidar system will help to identify possible obstacles on the Martian surface. Just before touching the planet’s surface, an automatic sequence will be performed to deflect possible threats. All is going well; China will become the first country to land a rover on Mars on the very first attempt.